YesterDaze, Inspired By Decades Of Fashion

From high-waist bikinis in the 40’s to sky-high platforms in the 70’s, most of the popular looks of past decades are still inspiring designers today.  Fashion has always indicated the current time in history and over the course of the last century, fashion has shifted from prim-and-proper dresses to sneakers and jeans. This inspired me, I had to walk this road. I had to play with fabric and bring it all to life through my eyes and my vision. In the famous words of Coco Chanel “fashion fades, style is eternal” and “a girl should be two things – classy and fabulous.”

How I wish to be a lady during these years. I know it was tuff but for fashion this was the time to blossom.

During the 1920’s we were given the Flapper Dress – a drop waist styled dress with decorative beads, fringe and other embellishments reflecting the mischievous time of this decade.  Social change before WWI caused women to feel empowered after gaining the right to vote in 1920.  We were now coming into a playful era with Jazz music on the scene and the legalisation of alcohol. Women were making an unconventional statement with the flapper dress along the with the short bob hairstyle.  Not only were women now free but their clothes provided freedom of movement with looser fitting clothes defined by the adoption of the camisole, the loose-fitting undergarment which replaced the tight-fitting corsets of the Victorian era.  Fashion trends included cloche hats, a mixture of brightly coloured clothes, and scarves and stockings with striking Art Deco geometric designs. We can not forget to mention “the little black dress” introduced to us by Coco Chanel and Jean Patou; long-lasting, versatile, affordable, accessible to the widest market possible and in a neutral colour. 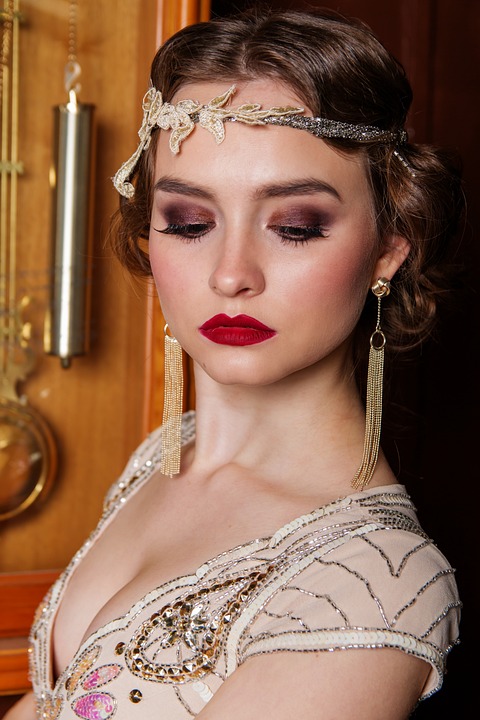 The great depression did not stop the fashion industry which was now full of glamour and style.  Women were now wearing midi length cut dresses with puff sleeves, belted waists and large collars.  The fashion industry underwent many changes due to the severe economic hardships of the time.  Zippers became a staple in finishing a garment as they cost a lot less than buttons and the dresses also now became shorter.  Fashion evolved into a feminine silhouette that was long and lean – popularised by the designer Madeline Vionnet.  Hollywood became a big influence on fashion and the silver screen brought us film icons like Bette Davis and Jean Harlow in glamorous gowns and tailored skirt suits.

During WWII, thousands of men were off to the war and women began taking over their positions in the workforce.  Women wore coveralls at work – a boiler suit made famous by Rosie The Riveter, which was typically made of denim or cotton featuring buttons down the front.  With the first half of the century being dominated by the war, there was a shortage of fabrics and rationing brought us Utility Clothing – tax free basic all-day suits, high waisted pants and the Bolero jacket with padded shouldering.   By 1947, after the war, Christian Dior launched the New Look collection in Paris, returning women’s fashion to a feminine silhouette with full skirts, waspy waists and soft shoulders.

Fashion in the 1950’s was exciting and diverse. The Baby-Boom era saw women going back to their feminine side, looking at their best for their husbands getting home from work. And Christian Dior’s New Look continued to influence the fashions of this decade.  Designs included pencil skirts, poodle skirts, polka dot garments, cropped sweaters and cardigans. The key shape for the decade was a feminine, exaggerated hourglass silhouette.  Blouses and jeans were also quite popular.

I think the 60’s was a time where the world came to life. Things changed back in the 60’s and although I am not always sure if it was for the better, we are where we are today because of all those small changes.

The fabulous Babydoll Dress.  Supermodel Twiggy was seen frequently wearing this style.  Women wanted to express their newfound Feminism – seeking styles that were not restricting.  The high waistline combined with the ultra-short length that the babydoll dress offered was the ultimate feminist statement.  Another great influencer of this time was First Lady Jackie Kennedy – the epitome of elegance with her perfectly white pearls and tailored suit dresses and started the trend of the Pillbox Hat – designed for her by Halston, this look became part of womenswear in the 1960’s.  The 60’s got rid of the pastel colours from the 50’s and replaced them with bright, vibrant colours. 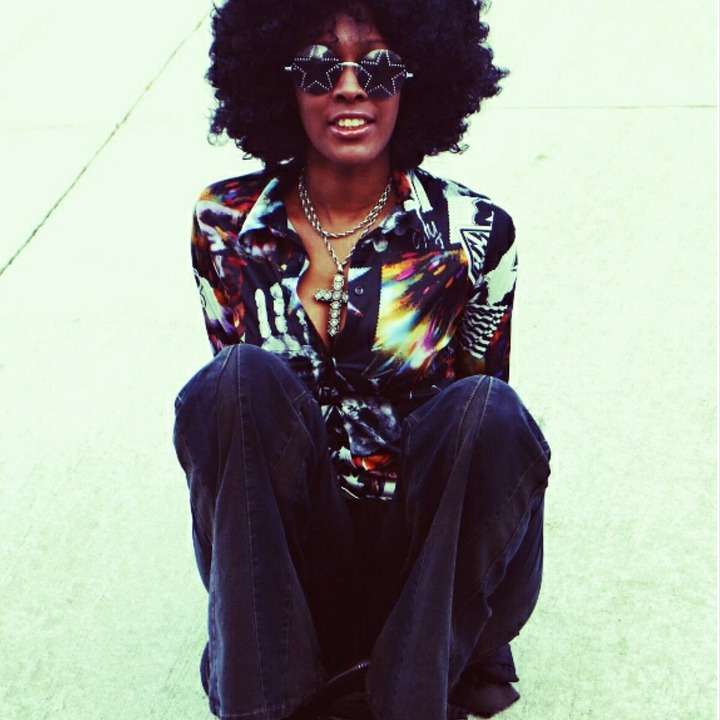 The first thing that comes to my mind when I think of the 70’s are Bell-Bottoms.  Popular towards the end of the 60’s up until the late 70’s, the bell-bottom trend could be worn casually in the form of flared denim jeans, or out to the disco in wild floral patterns.  The 70’s was a diverse era – comfort and casualness was key, and the hippie look took over the tailored chic look.  Clothes were made to mix and match with each other as well as across gender guidelines.  Vogue proclaimed, “there are no rules in the fashion game now”.   Clothing items included miniskirts, vintage clothing from the 1950’s and glam rock and disco styles that introduced platform shoes, bright colours, glitter and satin 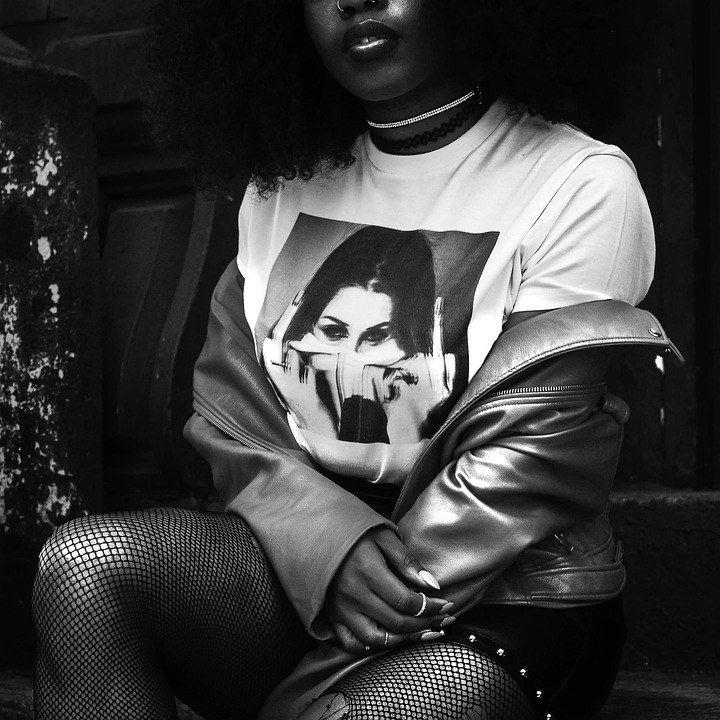 I am a 80’s baby and although the fashion of the 80’s didn’t bother me too much, I remember dressing up in my moms clothes, wearing those shoulder pads like a queen, thinking I looked dashing.

Shoulder pads, oversized blazers, ripped tights and leather jackets.  The 80’s was an age of a new generation of women entering the workforce which sparked the phenomena known as “power dressing” where women adapted menswear in a feminine style – shoulder pads were a big part of power dressing.  A decade of bold colours and styles and of course, permed hair.   As disco faded Madonna helped brought in the punk style and wearing a leather jacket over a white T-shirt became part of the fashion trend.  80’s fashion for women taught us terms like jelly bracelets, jelly shoes, neon clothing, leg warmers and Guess jeans. 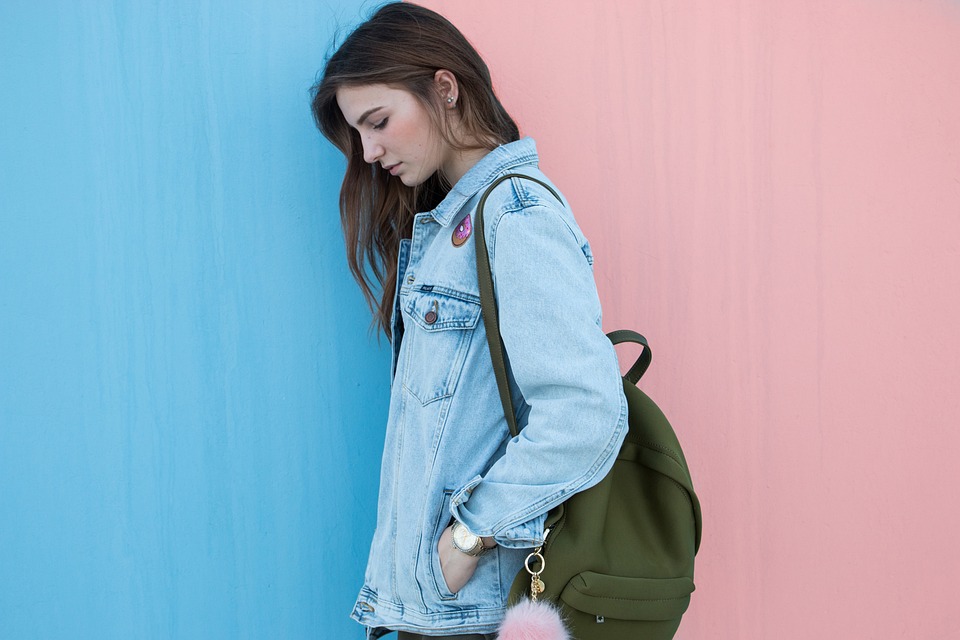 The years where I became a young woman, where I was influenced by fashion for the first time and where “what am I going to wear?” became frequent words to my mom. I loved hanging out with my radio, listening to the latest top charts on 5FM and paging through the Cosmopolitan, looking for inspiration and loving every page of it.

This decade brought us oversized clothing, bold patterns, butterfly clips and spaghetti straps.  The 90’s are known for low-rise pants, pleated minis and crop tops and who can forget the Spice Girls platform shoes.  Slip dresses first became popular in the 90’s and everyone from Gwyneth Paltrow to Kate Moss was wearing them on the red carpet.  The brand Roxy was also very popular during the 90’s and thanks to shows like Baywatch, the high-hip V-shaped swimsuit became an everlasting trend in the world of swimwear.  Blue jeans and denim were all the rage, the style of denim tended to be baggy and loose and in addition to regular jeans overalls in the denim material were also popular.

Casual clothing was a big part of the trend during the early 2000’s and denim was worn from head to toe in jeans, shirts, jackets and hats.  When we think of the fashion during this time, we think crop tops, hoodies, low-rise flared jeans, cargo pants, jean skirts, off the shoulder tops, ribbed sweaters, platform sandals and sneakers.  The Fashion in the 2000’s was a mash up of previous styles and hip-hop fashion was generally the most popular.  Many mid and late 1990’s fashions remained in fashion while introducing newer trends.  Velour tracksuits, often seen worn by Britney Spears, and popularised by Juicy which was written on the back was very trendy in the early 2000’s and celebrities were seen wearing the low-rise pants with matching sweatshirt on just about any occasion, despite the casual appearance.  Our outfits did not feel complete without a large wide belt, whether in shiny plastic or woven patterns. Tube tops with low-rise jeans was the perfect way to show off your belly ring and trucker hats by Von Dutch was a must have. Long tunics over jeans or leggings was also part of the fashion trend.

We have become quite comfortable in this decade with our skinny jeans, tees and sneakers and with only one year left to this decade, why would we want to go back?  Brands like Nike and Fila defined the Dad Sneakers trend and almost everyone has a pair of Vans and Converse sneakers as part of the skater fashion trend.  The 2010’s screams hipster fashion, athleisure and unisex style elements.  We also saw “mom jeans” and high-waisted bottoms such as pants, shorts, skirts and bathing suits becoming part of women’s fashion in the 2010’s.  Over the last 9 years many recycled fashions from the 1950’s, 1970’s and 1980’s have made a comeback – acid wash skinny jeans, bell-bottoms, tunics, baseball jackets, denim print leggings, oversized cardigans, 1940’s New Look dresses and trench coats, leg warmers, Ray-Ban aviator sunglasses, tube tops and small handbags.  In the past decades it was almost crucial to wear the trends of the year, but fortunately in the 21st Century we have a lot more freedom, mixing and matching trends from past decades and having your own signature style is the way to go these days.

The YesterDaze Range is all about bringing “old looks” back to life. Maybe not the way they saw it back then but the way I see it today. It’s all about being comfortable in whatever you wear, knowing you can like anything and not being told what you can and can’t do. Total freedom to style. I am a jeans and t-shirt kinda girl but I love a beautiful dress on those days when I feel exceptionally good about myself. Fashion is beautiful, but confidence is something you can’t buy. You can wear anything with confidence, and you will look spectacular. We are just decorating your beautiful self with something special from the past.

Where Can You Find This

The range is in the process of being launched online.. We had an amazing launch party which was a huge success with back orders piling up. These dresses will be available on the site as we launch them. Follow our Facebook page as well as our Instagram page not to miss out on anything. Remember Muppie Lounge makes something once, don’t regret not getting that dress.

We will WOW you.